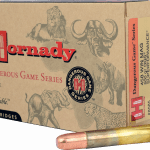 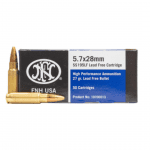 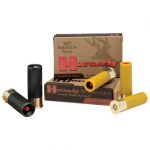 Hornady® manufactures Dangerous Game™ Series ammunition with only the finest components, under strict quality control measures. Our classic bullet designs are tailored to meet the needs of the serious safari hunter.

We use techniques and processes that rival hand loads, with the ultimate goal of making every cartridge accurate, deadly and dependable!

From the InterLock® SP-RP bullets to the heavy-hitting DGS® and DGX® bullets, each Dangerous Game™ Series load is topped with a deadly projectile.

SP-RP stands for “spire point – recoil proof,” and the design of this bullet eliminates the problem of tip deformation during recoil. These heavy-duty InterLock® bullets combine rugged design with improved trajectory in dangerous game rifles.

The DGS® non-expanding bullet is recommended for thick-skinned game such as elephant, rhino and hippo. Its tough copper clad steel jacket is designed to provide maximum penetration from all angles on thick-skinned and heavy boned dangerous game animals.

DGX® Bonded bullets are built to the same profile as the corresponding DGS® (Dangerous Game™ Solid) bullets but expand to 1½ to 2 times their bullet diameter. They feature a copper-clad steel jacket bonded to a lead core to provide limited, controlled expansion with deep penetration and high weight retention. Bonding the jacket to the core prevents separation from high-energy impact on tough material like bone, ensuring the bullet stays together for deep expansion.

Powders are carefully matched to each load to ensure optimum pressure and velocity, and to regulate in double rifles. Some of our Dangerous Game™ Series loads feature Superformance® propellant technology.

Like all Hornady® ammunition, our Dangerous Game™ ammunition uses the highest quality cases and primers available. Consistent components translate to consistent shooting in the field.